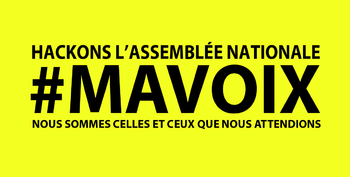 What is #MAVOIX ? Brief summary of 2017 experimentation for English speaker

A group of friends began the collective #MAVOIX (meaning "my voice") in France in 2015 - they all believed that the current form of our representative democracy has failed us.

The idea was to bring together diverse citizens from different backgrounds to collaborate, discuss and work out how to "hack" the Assemblée Nationale by allowing everyday citizens to participate in the creation of every single law. After a first run at a local election in 2016, the goal was set to send several deputies (Members of Parliament) to Parliament after the June 2017 election.

Once elected, these deputies would play a very special role. Instead of voting according to their own program or convictions, they would always vote according to the outcome of every citizen who had voted on an online platform: if, for example, 10 #MAVOIX deputies were in the Assembly, and the result from the online platform about a law was 40% YES, 30% NO and 30% ABSTENTION, then the #MAVOIX deputies would vote in the same proportions (in this case: 4 YES, 3 NO, 3 ABSTENTIONS).

To prepare for the national election campaign, the collective worked for two years without any leaders or charismatic personalities. Decisions were made horizontally, after in depth discussions, always trying to find a consensus. If people disagreed, they could "fork" (a software development term), which means both options were tested. Soon afterwards, taking into account the results of the experiment, people could decide which option(s) to drop and how to improve the one they kept.

This forking process was at the heart of the experimental spirit of #MAVOIX: myriads of small actions, followed by sharing of what has been learnt. An online forum, local/national  meetings  and open-source software were the tools used to share know-how and to deliberate on any choices to be made.

And because every contributor was an expert in some area, they developed a peer-to-peer process of teaching and learning skills. For instance, students from the Political-Science University created a MOOC  to help everybody understand the actual duties and obligations of an MP (Member of Parliament) during his or her term in office. In these ways contributors could help and volunteer and bring  ideas to resonate with the campaign.

Journalists were always welcome to watch any #MAVOIX discussion or event. However, they were not allowed to interview contributors individually (but could sometimes interview a small group of contributors). This important choice was made to avoid the appearance of any "cult of personality" within #MAVOIX and any struggles for individual exposure.

Finally, the collective decided to run a campaign in 43 constituencies (out of 577). There was 505 volunteers who applied to be candidates for the election with around 40% female and 60% male.

The candidates were then chosen by sortition (random selection) and gender balance was ensured. The sortition event took place in Paris on May 2017 and led by a professional court usher. In front of 304 people, 86 candidates were randomly selected (43 men and 43 women - one male and one female for each constituency) from the pool of volunteers. The use of sortition allowed people to run as a candidates whatever their wealth or network, and it removed all of the usual disputes and political factional infighting about who should run as a candidate. It was an essential ingredient in making #MAVOIX a good place to contribute, with a high level of solidarity and caring between people. Each of the 43 campaigns was financed by individual citizens (and not by any political party). The #MAVOIX candidates received a total of about 11000 votes from the French national election.

Even though no deputies were elected, the collective enabled people with no professional political experience, with various political views, to empower them,elves and create an unconventional campaign. The only rules were about how the group should function (horizontality, no personality cults, caring for the other people in the group, dealing with media, etc). All other choices that were made were an experiment, with some successes and some setbacks. It convinced the participants, and many acknowledged it, that the experience has helped them develop in new ways which will feed into their further lives and activities, whatever the area (political, social care, associations, entrepreneurship....).

This summary has been published for the website The Sortition Foundation.